Thanks to our generous donors and supporters, Ability New Brunswick is providing services and programs that are making a significant difference in people's lives. We're delighted to share their successes with you here. 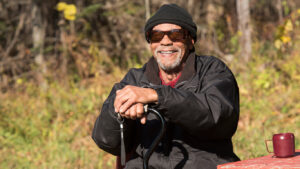 “It’s a whole new world for me now. I’m a whole new person.” - Stan Howe At 79 years old, Stan Howe feels like he has a whole new lease on life. In late 2017, the Fredericton man was in his backyard when he took a sharp pain in his leg. He shook it off, and didn’t think much more about it. The next day, though, it came back. This time, he collapsed. Friends helped him to the car and took him to hospital.  Soon enough, he would discover it was a blood clot that would cost … END_OF_DOCUMENT_TOKEN_TO_BE_REPLACED

Shelley Trenholm knows all too well how quickly life can change. Shelley was a successful career woman in her early 50s when complications from a drug she had been prescribed triggered a cascading health crisis that landed her in the hospital. Not long after the initial health crisis, Shelley experienced a brain bleed and then a stroke. Now, at 56 years of age, she is living alone in a Fredericton apartment on supplemental oxygen and dependent on personal care workers.   “I … END_OF_DOCUMENT_TOKEN_TO_BE_REPLACED